Writing a biography of Jacques Derrida is no small task. The biographer is not only confronted with an abundance of personal material, he or she must also confront Derrida’s extensive and notoriously complex oeuvre. Matters become even more complicated when considering the author’s autobiographical writings and his almost obsessive attempt to create his own archive. In the early years of his career, Derrida was extremely reluctant to disclose any biographical information, but once he had revealed the first details on his personal life in a 1983 interview with Catherine David for Le Nouvel Observateur, Derrida intensified his attempts to narrate and thereby control his biography. This biographical turn resulted not only in some of his best known texts,[1] but also in the donation of his personal archive to the Langson Library at the University of California, Irvine, and the Institut Mémoires de l’édition contemporaine (IMEC), close to Caen. However, as Peter Salmon notes (Peter Salmon, An Event, Perhaps. A Biography of Jacques Derrida, London / New York: Verso, 2020), this self-archivisation and self-narration does „not simply record, it produces. By selecting what is important, it rejects what is not” (270). The same is true of Salmon’s book: it “adds another narrative version of the life of Jacques Derrida” (ibid.). 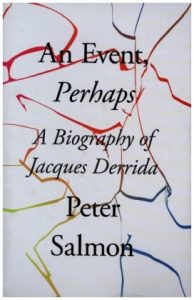 As stated in the introduction, the author considers his work to be “an intellectual biography“ that “seeks to identify and explicate the ‘key concepts’ or the ‘fundamental ideas’“ (3) of the philosopher. More precisely, Salmon’s book “aims to set out the intellectual development of Jacques Derrida; to situate it in events both private and public; and to argue for its importance as an event in the history of philosophy and of thought more generally” (4). The book can probably best be understood against the background of a common misrepresentation of deconstruction, especially in the English speaking world: While Derrida is usually depicted as a ‘post-modern’ or ‘post-structuralist’ enfant terrible, aiming at violently destroying the distinction between nature and culture and hence the possibility of political philosophy (or even of the polis itself), Salmon wants to give a more nuanced account of the “event in the history of philosophy” that is associated with both the notion of deconstruction and the name Jacques Derrida. More precisely, he tries to picture the appearance of Derrida not as a mere spectacle or an episode in the history of philosophy but as an “Ereignis” in the philosophical sense of the word, as something that would radically transform and maybe even transcend philosophy itself. For this purpose, he neither attempts to gather new biographical material, nor does he want to give a comprehensive account of Derrida’s personal life. While he devotes lengthy digressing passages to Derrida’s philosophical influences (such as an exhaustive portrait of Edmund Husserl or seven consecutive pages on the life and thought of Emmanuel Levinas), Derrida’s teenage and university years and in fact his entire life up until the event in 1966 (the philosopher’s famous appearance at a conference on structuralism at John Hopkins University in Baltimore that serves as the opening scene of the book) are given surprisingly little attention.

Derrida himself stated that his “intellectual biography” began in 1942, with his traumatic expulsion from school due to the Vichy government’s anti-Semitic measures. “From that point on,” Derrida claims, “it is no longer possible—for me or for anybody else—to distinguish the biographical from the intellectual, the non-intellectual from the intellectual biography.”[2] And it is precisely the biographical material from the period between 1942 and the aforementioned conference in Baltimore in 1966 that proved to be the most illuminating for the philosophical and political nature of Derrida’s entire project. His Algerian youth with its profound experiences of racism, anti-Semitism and colonialism, his early involvement with existentialist philosophy, his first years in Paris at the preparatory Lycée Louis-le-Grand, his defining years at the École normale supérieure, his opposition to the Algerian War; all these experiences shed a light on his deep roots in the philosophical tradition and on his understanding of the political that would come to shape his writing and thinking.[3]

Peter Salmon makes little effort to investigate these formative years. He does not so much write the biography of the philosopher, he rather paints a portrait of the event of his philosophy. In this sense, the main title of the book is quite accurate, which is to say that Salmon portrays Derrida’s philosophy as something unexpected, something radically new, a bolt from the blue, an event in the Heideggerian sense. In his effort to do so, Salmon might remind the reader of the main character in Céline Sciamma’s 2019 movie Portrait de la jeune fille en feu (Portrait of a Lady on fire). In the film, the young painter Marianne sets out to paint a portrait of Héloïse, a young lady who is to be married to a nobleman from Milan even though they have never met. The portrait is commissioned by Héloïse’s mother to convince the nobleman of the union. Marianne’s mission is a difficult one. She has to travel to a remote island to undertake the work, to a place that seems strangely detached from society and history. But more so, Héloïse resists not only to the idea of becoming married to a stranger, but also to having her portrait painted at all. Her mother has therefore instructed Marianne to paint her in secret. The outcome is an accurate, but conventional portrait.

The same can be said of Salmon’s portrait: with a few firm strokes, he carefully sketches the event that began to unfold in 1966. In eleven chapters and less than 300 pages, he paints an accurate and conventional picture that is dearly needed both within and beyond the realm of academic philosophy.[4] As opposed to many other commentators, Salmon has taken on the task of working through most of Derrida’s oeuvre. He remains equally distant to Derrida’s overly mimetic disciples and to his often unfair and sometimes embarrassingly ill-informed critics who accuse him of “dangerous relativism” (9). His distant but sympathetic perspective allows for a balanced account of the most complicated and misunderstood subjects, such as Derrida’s relation to women and to feminism (chapter 7), his involvement in the affair following the killing of Hélène Rytmann by her husband Louis Althusser (177–81), or the controversies surrounding Martin Heidegger’s and Paul de Man’s political entanglement (212–22). Unfortunately, Salmon does not dismiss the myth of the ‘ethical turn’ in Derrida. Although he points out that Derrida himself argued that the “new concern with law, and friendship, the gift, and hospitality” which informed his writings from the early 1980s onward “were not in fact new, but grew logically from his earlier thinking,” Salmon holds that “this dimension of his thinking need not have occurred to him” before (222).

Derrida can be portrayed in a different way, perhaps a bit less Olympian, a little rougher and more militant. But Salmon’s entertaining intellectual biography paints a recognizable portrait of the event that connects Derrida to so many crucial moments of the 20th century, to fundamental philosophical problems, and to countless pressing issues of our time. While the Derrida-scholar will likely stick to Benoît Peeters’ extensive study, Salmon’s elegant and concise style appeals to a much broader audience. Thirty years after the intervention against Derrida’s honorary degree at Cambridge University, this portrait may serve as an introduction for many different readers from various backgrounds, both within and outside of academia. In this sense, Salmon’s accurate portrayal is a valuable achievement. And yet, the reader might feel a bit like Héloïse in Portrait of a Lady on fire when she gets to see Marianne’s first attempt at her portrait. It is conventional, the model is recognizable, and the future husband will be satisfied. It will do the job, but something is missing: the fire.

Oliver Precht is a research associate at the ZfL, currently working on his project “Marx in France. The Self-Determination of French Theory (1945–1995)”.

[4] While using a similar format, David Mikics’ “story of Derrida’s skepticism” fails at this task, and his depiction does not bear much resemblance to the actual event, cf. David Mikics, Who was Jacques Derrida? An intellectual Biography, New Haven: Yale University Press 2009, p. xiii.